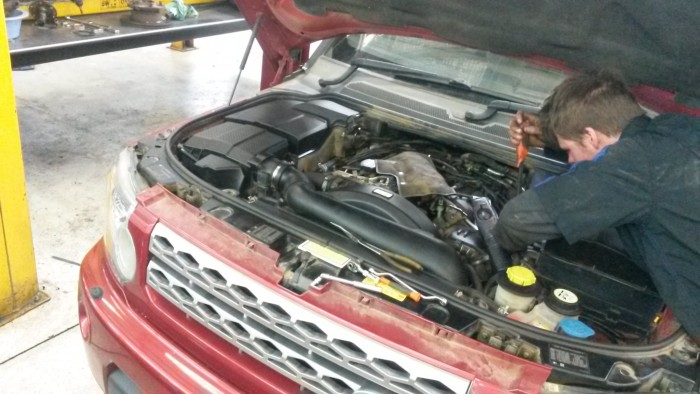 As a follow-through on our previous post, we discuss other common problems experienced by owners of Land Rover Discovery 3/4 and Range Rover Sports L320 – very similar vehicles. If you find yourself asking “Should I buy this particular car?”, then read on and make an informed decision.

It’s a myth that Land Rovers are expensive to repair and suffer lots of problems. The idea is mostly spread by people who don’t believe what great cars Land Rovers actually are. They could be jealous, who will ever know? It’s like that Holden vs Ford story probably. The truth is that Four Wheel Drives are complicated vehicles with extra parts added (transfer box, an extra diff). If you have a big Japanese 4×4, you’ll also find that if it breaks down, it can cost quite a bit to repair. Sometimes a part can be cheaper than you would think, or it can be quite expensive. Having worked on Land Rovers extensively, I have to say that the parts are no more expensive, and sometimes much cheaper, than equivalent vehicles.

We find that well-maintained cars last a long time. If you shop around and get the cheapest service, you will get problems as a vehicle gets older. A service is more than an oil change; it needs to have a good check over the whole vehicle by someone who knows it well, to find early signs of a problem developing. And then those little problems need to be fixed before they become big problems.

At Roverworks, a minor service is $395, which includes your oil, oil filter and air filter, but we also spend an hour giving your car a full safety and health check. This saves you big money long term. We’ve had feedback from customers saying that they’ve been charged $850 for the same service. If you’ve been paying that much, you need to come see us.

We have seen two customers – one with a Range Rover Sport L320 and the other with a Discovery 3 (both with 2.7 TDV6 Lion diesel engine) with 320,000 kms plus on them and still going strong – nothing wrong with them. They have been well-maintained through their lives. If something has needed repair, both owners have not complained about it being the car’s fault, and just got it done. In the end it has worked out well.

As these vehicles get older, there are a few common things that we see at Roverworks as they wear out:

Firstly, exhaust gas recirculation valves can become sticky, which will show up as the engine not performing as well as it normally has. This is a fairly straightforward fix. This is not a reason to not buy one of these excellent cars.

The second thing is that the front lower control arm bushes can become worn. We generally replace the whole control arm on these, as it saves you on labour over changing bushes themselves. Keeping a good eye on suspension bush play is crucial at services. These should be replaced by a Land Rover specialist (dealer or independent) NOT at a suspension shop – we have seen one owner waste more than $2000 on bushes that made the suspension harsh and unpleasant to drive. These cars are not good things to fool around with; they are well made pieces of equipment that engineers have put a lot of thought into. They should be maintained at that standard.

These vehicles have Electronic Air Suspension (EAS), which uses airbag struts instead of springs on each wheel. The car adjusts its ride according to conditions, and uses an air compressor unit to do this. The original compressor can wear out over time, usually showing up as error messages on the LCD screen on the dash, or at service time when the car is put onto the diagnostic machine. Other symptoms include a noise coming from the compressor (located on the chassis forward of the left hand passenger tyre), and in extreme cases, the suspension can sag when the pump has died and the pressure gone soft. This unfortunately will cost in excess of $1200 to repair; however there is an upgraded part available that we believe may be more robust.

One thing that we at Roverworks recommend is that the 6 speed automatic on these cars DOES need to be serviced. They have come as a sealed unit, with special oil, that is guaranteed for “life”. We pull the automatic transmission pan (containing the filter) off, drain and flush the oil, and replace it with a heavier modified pan and easily changeable filter, and replace the oil. In the future, it’s a matter of simply changing the oil and filter, which brings down the price. We would recommend this be done each 80,000km unless you tow a lot, in which case do it more often. Maintenance saves you money – these transmissions are expensive to replace if they fail. Those 2 cars with the 320,000km plus on them have had this service done every 80,000km, and the engines and transmissions are still purring along beautifully.

These are great cars. Realise that all 4x4s can be pricey to fix if something fails. Land Rovers are legendary vehicles – maintain them well and they will look after you (like my 1997 Discovery 1 with 350,000km on it). Also, if a car costs in excess of $80,000 new – is 2% of its value a lot in repairs if something went wrong?