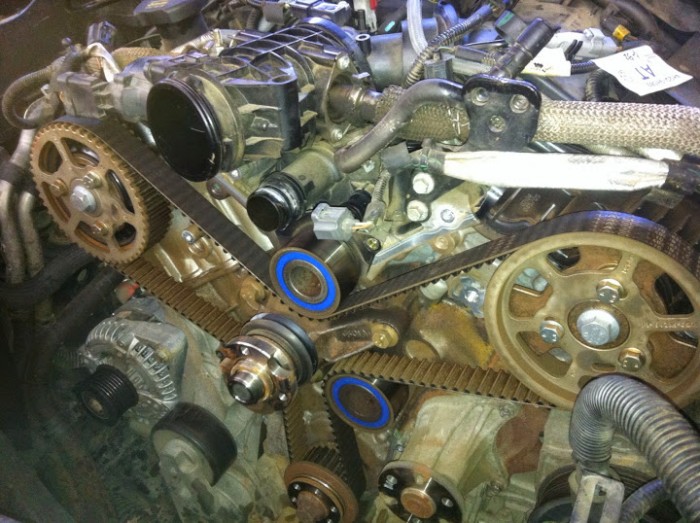 It’s quite interesting to note some of the features of the TDV6 engine when stripped – particularly the location of the timing belt, the high pressure fuel pump, the fuel cooler, oil filter and the top coolant neck.

Each 168,000 kms, the timing belt job needs to be done, along with a major service. The timing belt on the front of the engine, under the timing cover, needs to be replaced, along with the tensioner that comes with the kit. We also replace the two idler pulleys (not in the kit – they’re the ones with the blue circles on them), because they won’t last forever. There is also a belt from the back of the left-hand head cam pulley to power the high pressure fuel pump with a tensioner. This needs to be replaced in the same job. Both belts can be replaced with the engine still in the car. 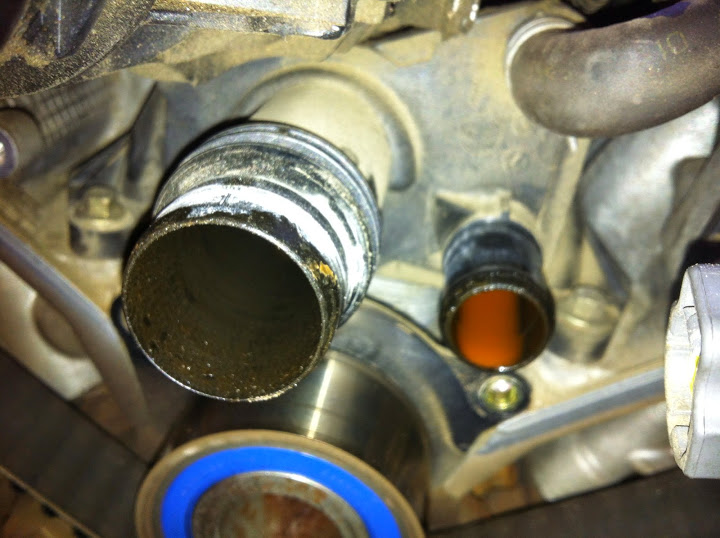 We also change the serpentine drive belt, idler and tensioner, and the little plastic top coolant neck (in the valley). We have had a few of these crack and leak, and stripping to get to them is an unnecessary expense for our customer. By replacing it with the cam belt, we can do it with no more labour, and it only costs us a few dollars to supply the part, reducing the possibility of the car coming in for this problem only. You do not need to get the cam belt changed more frequently than the 168,000 km recommended frequency. It is a tough and robust part.

However, if you try to do this job at home, it will end in tears. We have fixed one engine where someone who should have known better had misaligned the cams on the left-hand head in regards to the crankshaft. What happened was that the valves hit the pistons on that head, destroying the exhaust cam and all the exhaust rockers. Obviously the guy had cranked it, heard the problem, stopped, and realigned the belt – then it fired up and worked. It then fell apart in 1000 km, at which time it came in to us for a severe misfire. It’s testament to the strength of the pistons, crank, and conrods that they were undamaged.

It is never a good sign when you drain oil from the sump and find roller bearings from the rockers in the oil however. In this case, we replaced the head, did the cam belt service properly, and she fired up and purred like a kitten again. The moral to this story – not only should normal folk steer clear of a job this tricky, but generalist mechanics who fix a Subaru one day and change the oil on a Commodore the next should be suspected. You need to be doing these things all the time and specialise in them. One guy’s misadventure in this case cost thousands of dollars to repair – enough to make a 2005 D3 really be borderline on being economically viable to repair.