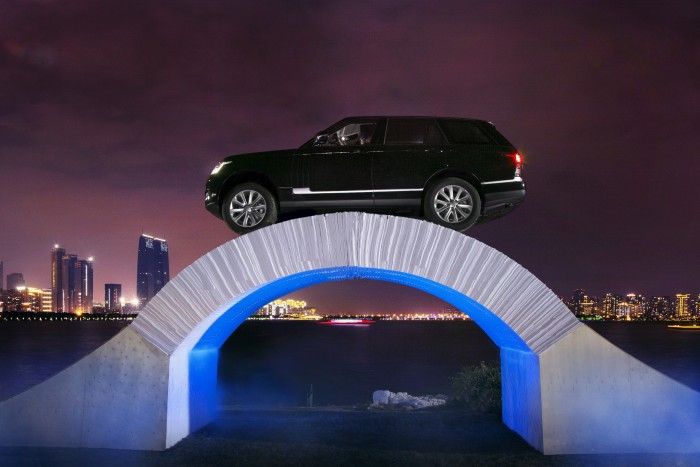 Yes, you read that right. As part of Land Rover’s 45th anniversary celebration of the Range Rover family and Range Rover technology innovation, the luxury SUV was driven across a unique bridge installation entirely made of paper. The event, which transpired in Guangzhou, China, on 19 November 2015,demonstrated how the Range Rover’s intelligent 4WD all-terrain technology and lightweight aluminium construction made the jaw-dropping drive possible.

The structure, which was five metres long and was free from bolts or glue, was made of high quality paper manufactured by James Cropper PLC. It took them three days to build and was erected in the ancient water city of Suzhou, known as the “Venice of the East” because of its bridges. The groundbreaking drive is another one in the long list of firsts for the luxury SUV. It was the first luxury SUV in the world, which made its first appearance in 1970. It was also the first vehicle to be driven across the Darien Gap in Central America, which happened in 1972. It also gained the distinction of being the first 4X4 to have ABS anti-lock brakes. It was the first to have both Electronic Traction Control and electronic air suspension, which was introduced in 1992.

Steve Messam, the artist and designer of the paper bridge, says that “Paper structures capable of supporting people have been built before but nothing on this scale has ever been attempted. It’s pushing engineering boundaries, just like the Range Rover, and the ease and composure with which the vehicle negotiated the arch was genuinely breathtaking.”

Nick Rogers, Director of Group Engineering of Jaguar Land Rover, emphasized the importance of holding the event in China. “China is a hugely important market for Range Rover, so we have picked the perfect place to celebrate 45 years of our luxury SUV family. Range Rover’s advanced lightweight body and peerless all-terrain capability were crucial factors in making this unique drive possible.”

Check out the video of the bridge crossing here: